In the second instalment of the “Our Changing Climate” series, we share the story of project manager Alex Sarmento and his journey to raise awareness on the importance of local trees and the role they play in carbon sequestration and mitigating against climate change in his home country of Timor Leste.

We hope that you have enjoyed this series so far, if you would like to read the first blog of the series featuring a project led by SEED Madagascar, please click here.

Growing up in the central highlands of Timor Leste, Alex Sarmento loves his community and the beautiful environment around his family villages of Laclubar and Soibada. After returning home from University studies in the Philippines in 2007 he was saddened to see the hills becoming more and more degraded with heavy monsoon rains and droughts. His community were suffering from crop losses, lack of shade and soil erosion. Alex became inspired to plant trees with local farmers using financial support from Australians in the regional town of Bathurst, New South Wales. Thousands of trees were planted in 2011 and 2012 but with poor survival rates. Paying farmers to plant the trees was unsustainable. A long-term solution was needed to tackle climate change impacts and ensure long-term income for communities to improve their livelihoods and continue to climate action. The ambitious idea of achieving carbon accreditation for smallholder farmers was hatched even though there was only one successful example in another part of Timor Leste.

In 2017, a Darwin Initiative project came to the rescue! A partnership was formed between Charles Sturt University and Group Training Northern Territory, Australia to provide technical expertise in forest carbon modelling and social research. As project manager, Alex hosted visits by the technical team, supervised field staff and liaised with the community. During the project’s lifetime, farmers grew 200,000 trees in nurseries and reforested 120ha of degraded land. The forests were measured for carbon uptake and qualified for carbon accreditation. It is the first scheme in Timor Leste to be registered with the Plan Vivo Foundation. The project developed a stakeholder management structure for equitable carbon income distribution, and ensured poor, landless households also benefited from growing trees and women’s microbusinesses. 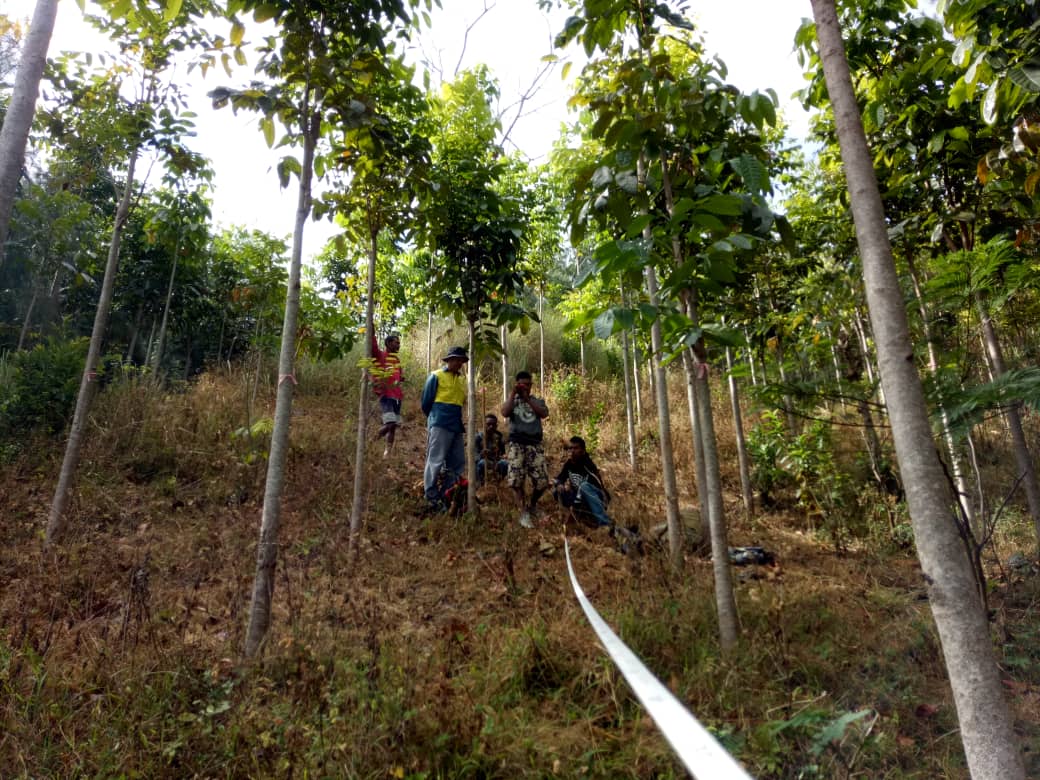 One of the beneficiaries, Fernanda Soares du Terre of Soibada is 54 years old with seven adult children. They own their land, which they inherited through her husband’s father, and on their land they grow mahogany, coffee, and teak. In 2018, they received around $1,600 in payments from the project for their trees. Fernanda feels positively towards the project due to the financial incentives and believes that the value of her land will increase with the trees. In 30 years, once the trees have matured they will be able to be used for tables, chairs and for building materials.

She says that “The most important thing at the moment is to find money to pay for the children’s education. When we look after the trees, we can get money from the trees”

Local communities are now more aware than before of the benefits of growing trees for household income and biodiversity. This source of income has proved essential for food, clothes, household items and school expenses. The project was a catalyst for further investment in upland reforestation and climate change mitigation policies. Local Timorese partner, Foundation for Carbon Offsets Timor Leste, will continue to scale out community reforestation, provide carbon income for households, facilitate community development including women’s enterprises and participate in climate change policy implementation in Timor Leste. The project demonstrated that smallholder farmers in developing countries can engage with the international carbon market for long-term poverty alleviation.

Written by Joanne Millar and Alex Sarmento. Further information on project 24-025, led by Charles Sturt University can be found here or at communityreforestationtimorleste.wordpress.com. The article from this project and others are featured in the “Our Changing Climate” Darwin newsletter, which is available here.