Fantastic Flora: The rarest coffee in the world

Welcome to the third and final post of the Darwin Initiative “Fantastic Flora” blog series. This post features a Darwin scoping project that recently rediscovered a species of coffee that was seen last in 1954. Unfortunately, the forest where this unique species was found is under threat from mining and deforestation, but through conservation this species may be able to secure the livelihoods of the local communities and Sierra Leonean farmers.

If you would like to read the entire series, follow the links for the first and second blog posts.

Whilst leading a project to rehabilitate Robusta coffee production in Sierra Leone with the Natural Resources Institute , we heard about another coffee that is native to Sierra Leone. Known botanically as Coffea stenophylla and colloquially as the ‘highland coffee’, this species was first found in Sierra Leone in 1834, and has probably been cultivated since the 1850s. Reports from the 1920s indicate that the native coffee was of “exquisite” flavour, as good as the best Arabica coffee, and highly sought after. During a trip to Sierra Leone we asked local farmers to help us find highland coffee, but the closest we managed to find were three plants in the Sierra Leone Agricultural Research Institute coffee collection. Later genetic analysis showed that they were hybrids between C. stenophylla and C. liberica.

In 2018 the Natural Resources Institute were able search for this highland coffee through funding provided by the Darwin Initiative to carry out a scoping project. They visited the Western Peninsula National Park on the southern edge of Freetown which was threatened from encroachment, firewood collection and poaching for bush meat. Fortunately, the deeper that the team ventured into the reserve the health of the forest improved due to the lack of human disturbances. Past reports indicated that C. stenophylla was common in such areas, but despite the reassurance from local forest guards no coffee was found. 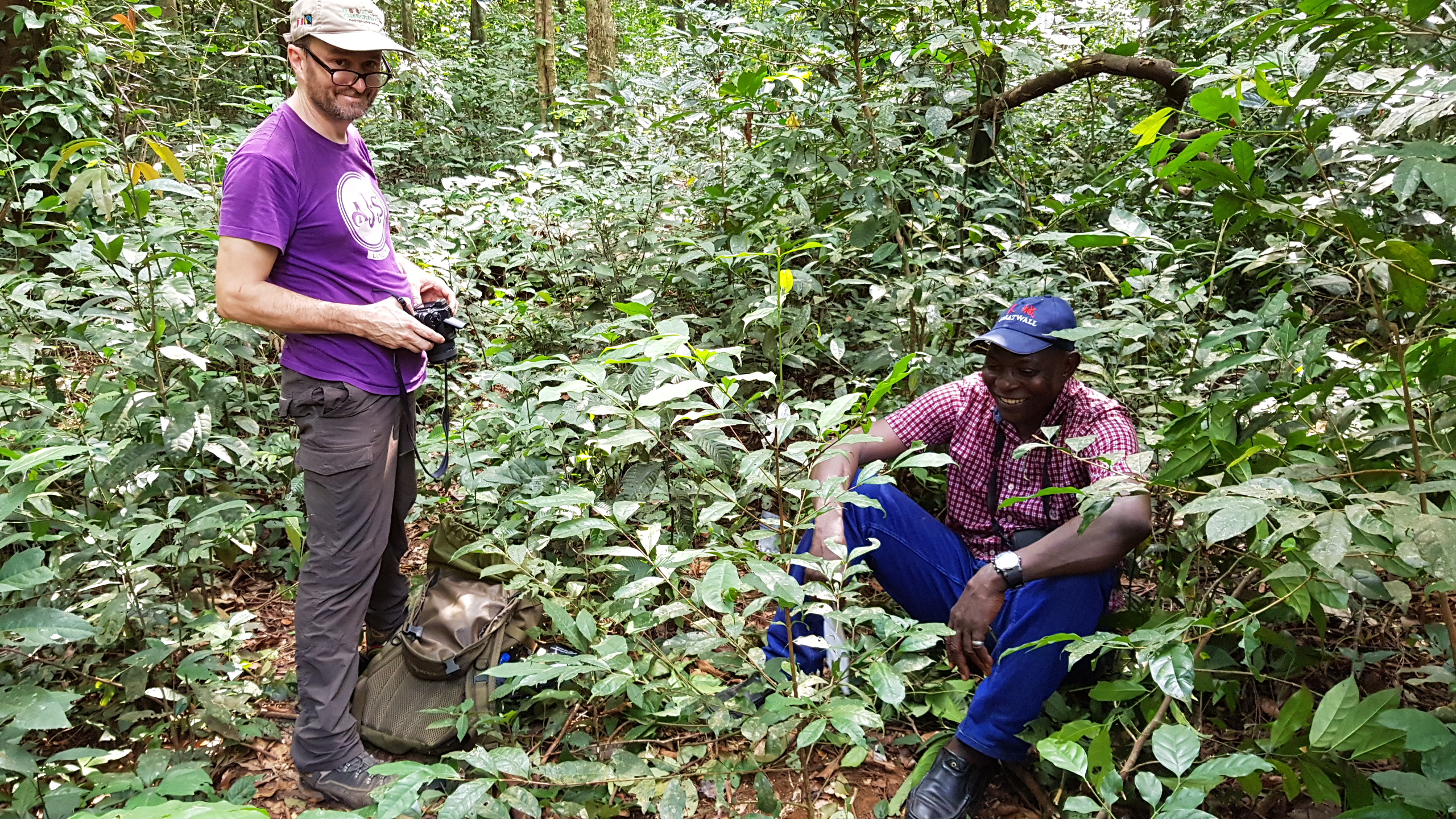 The search continued to the Kasewe Hills Forest Reserve, the area where C. stenophylla was last found in 1954. On exploring Kasewe it became apparent that much of the reserve has been deforested, and the only chance of finding the wild coffee would be on the forest-rich hilltops. After much searching of different coffee relatives (plants of the Rubiaceae family), they finally found what they thought was C. stenophylla. The plant was found in a forest patch only about 500m across and was the only one of its kind.

Although C. stenophylla had not previously been recorded in Kenema District, the Kambui Forest Hills Reserve is one of the closest protected forests to the Kasewe Hills. With the help of the District Forest Guards the team explored logging trails in the lowland forest, but had to create a new trail up-hill through the forest and towards the ridge top. The first coffee plant was found 390m above sea level and within 100m of this we found another 15–20 plants including three mature trees about 6–8m tall.

Gold mining occurring in the forests where C. Stenophylla was rediscovered, Credit – University of Greenwich

In both Kambui and Kasewe the plants had no flowers or fruits, which made it difficult to be completely sure that we had indeed found C. stenophylla. Despite this, leaf samples were used for a subsequent genetic (DNA) analysis, which confirmed that the plants from these locations were indeed the missing highland coffee of Sierra Leone. The Kambui Hills are also under threat from encroachment from the town of Kenema, artisanal gold mining and deforestation for subsistence agriculture, but there is still a significant block of primary forest at its core. Bringing this species into cultivation again and developing it as a unique coffee crop could provide a unique and valuable product, which would benefit local communities and future generations of Sierra Leonean farmers.

For more information on project DARSC196 led by the University of Greenwich working in Sierra Leone please click here. The full article from this project and others can be found in the latest edition of the Darwin newsletter here.