2017 marks the 25th Anniversary of the Darwin Initiative! Since it was first announced in 1992 at the Rio Earth Summit, Darwin has gone from strength to strength. This year saw us passing the 1000th project mark, bringing the total number of funded projects to 1,055 – a fantastic legacy!

In celebration of this anniversary, and celebrating the legacies of famous naturalists Gerald Durrell and Charles Darwin, six stamps and a miniature wooden sheet, illustrated by artist Sara Menon, were issued by Jersey Post on Wednesday 14 June. The animals and birds that feature on the stamps are subjects of conservation projects undertaken by the Durrell Wildlife Conservation Trust with support from the Darwin Initiative over the past quarter century. Featured on the stamps are: Livingstone’s fruit bat, Telfair’s skink, the mountain chicken, Hispaniolan solenodon, the pygmy hog and the mangrove finch. As the symbol of the Darwin initiative, the finch is the subject of our latest blog looking at the extraordinary work done by the Durrell Wildlife Conservation Trust, with the Darwin Initiative’s support, to protect the species. 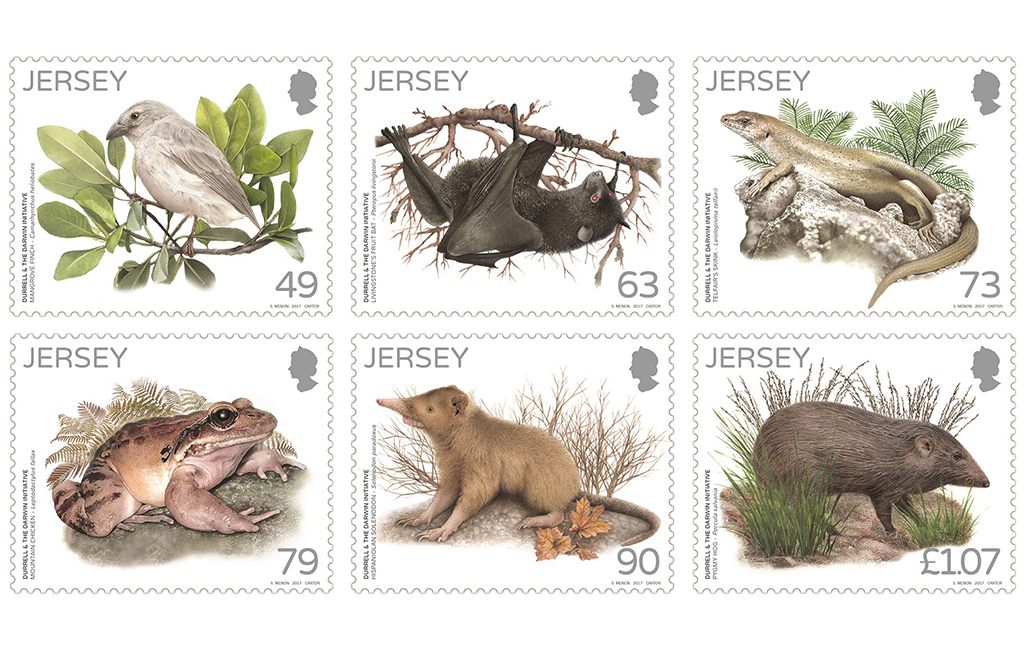 In 2005, Durrell Wildlife Conservation Trust was invited by Galápagos Conservation Trust to look at the apparently catastrophic decline of the critically endangered mangrove finch in Galápagos, Ecuador. This endemic finch, one of Darwin’s finches and the rarest bird in the archipelago, was once found at several mangroves on the coasts of Isabela and eastern Fernandina. Since limited to two small mangrove patches on Isabela, the exact reasons for its decline were unclear. Durrell, in partnership with the Charles Darwin Foundation and Galápagos National Park, began identifying the causes of decline and establishing strategies for restoring the species while developing a much better understanding of the finch’s ecology across two Darwin supported projects.

Fundamental to the success of these projects was the identification of dedicated and experienced key personnel with the ability to work in challenging field sites, as Galápagos can be both beautiful and very hostile. Field manager Birgit Fessl had already studied the finch before taking on this role, advisor Hernan Vargas knew the bird intimately and team member Segundo Goanna had worked with Hernan at the field sites before joining Birgit’s team. This team, with support from Francesca Cunninghame who headed up the second project, and the overall project partners, can be credited with the success of these projects.

And the finch? Things move fast in conservation. The team quickly learnt that the mangrove finch is not only a specialist of mangrove, a rare habitat in Galápagos anyway, but that it only likes one specific type of mangrove, where uplifted beaches prevent the tides from removing leaf litter and where crabs are not present. The team found that invasive rats were suppressing the finch; their removal from the mangroves brought about immediate signs of recovery. This, however, threw up new problems. Where previously rats would limit the number of hatching chicks, their removal allowed invasive parasitic flies to inhibit chick survival, presenting further challenges for the finch’s protection.

The mangrove finch is still very rare and only survives through ongoing support of the Darwin projects’ partnership long after the original projects were completed. All of the key personnel from the projects remain committed to the finch’s survival – removing the chicks from their nests, hand-rearing where the flies can’t get to them and returning them safely to the mangroves. The Darwin Initiative has allowed Durrell to develop an extraordinary international partnership and team that remains committed to this remarkable bird and to ensure survival of the Darwin logo!

Many thanks for Glyn Young from Durrell Wildlife Conservation Trust for his contribution to this blog. For more articles celebrating the 25th Anniversary of the Darwin Initiative, please see our newsletter.

Do you have a project that has been supported by the Darwin Initiative? How has the fund helped you over the last 25 years? Be sure to tweet us @Darwin_Defra, and use the #Darwin25 hashtag to celebrate this special milestone! And feel free to get in touch at darwin-newsletter@ltsi.co.uk.