In our most recent newsletter we invited articles from Darwin projects on the theme of Sustainable Tourism, and we are blogging some of our favourite articles here! Our last blog focused on sustainable scuba tourism in Sudan’s newly designated marine world heritage site!

This time we hear an update from a project working to develop a tourism venture with fishing communities that work alongside the iconic Irrawaddy River dolphins in Myanmar.

Written by project leader Paul Bates of the Harrison Institute

The objective of this UK-Myanmar project looked simple on paper – ‘To develop two new rural destinations on the Ayeyarwady River for niche tourists interested in Myanmar’s cultural and natural heritage’. The destinations (only accessible by boat) were situated at Hsithe and Myitkangyi villages, respectively 45 and 60 km upstream of Mandalay and the aim was: to help (1) alleviate poverty in the two village communities; (2) conserve the Irrawaddy River dolphin (Orcaella brevirostris) and other river wildlife; (3) preserve the culture of the fishermen and women who have traditionally fished cooperatively with the dolphins.

So how did we do? On the positive side, the destinations are up, running and beautiful; average spend per tourist (in the village) is currently between $28 and $36 and all money spent in the village stays in the village (this, in village communities where a typical wage is about $3/day). That said, the villages are remote and visitor numbers at 190 were perhaps at the lower end of our original expectations. However, in the last six months, the villages received 13 inspection tours from 41 individuals representing 10 private sector travel companies and after extensive marketing by the project’s UK and Myanmar staff, interest amongst tour companies is very encouraging and supportive for the 2017-18 season.

Meanwhile, there are many positive messages to take away from our experience so far. Numerous workshops and training programmes have sparked amazing creativity amongst the villagers, resulting in a spectacular range of handicrafts: everything from funky, off-the wall artefacts made from recycled cement bags, to beautiful carvings from drift wood, and jams and chutneys made from local fruits. There are distinctly branded bags of peanuts and spices, and locally produced honeys, to name but a few. Each month, new ideas from the villages lead to new products in the visitor centre shops – this is wonderful! Furthermore, talks are currently in progress to market the products elsewhere in Myanmar and on-line through a supplier in Yangon. We are also hopeful that a luxury Mandalay hotel will buy for its clients’ breakfasts the very tasty mango jam. 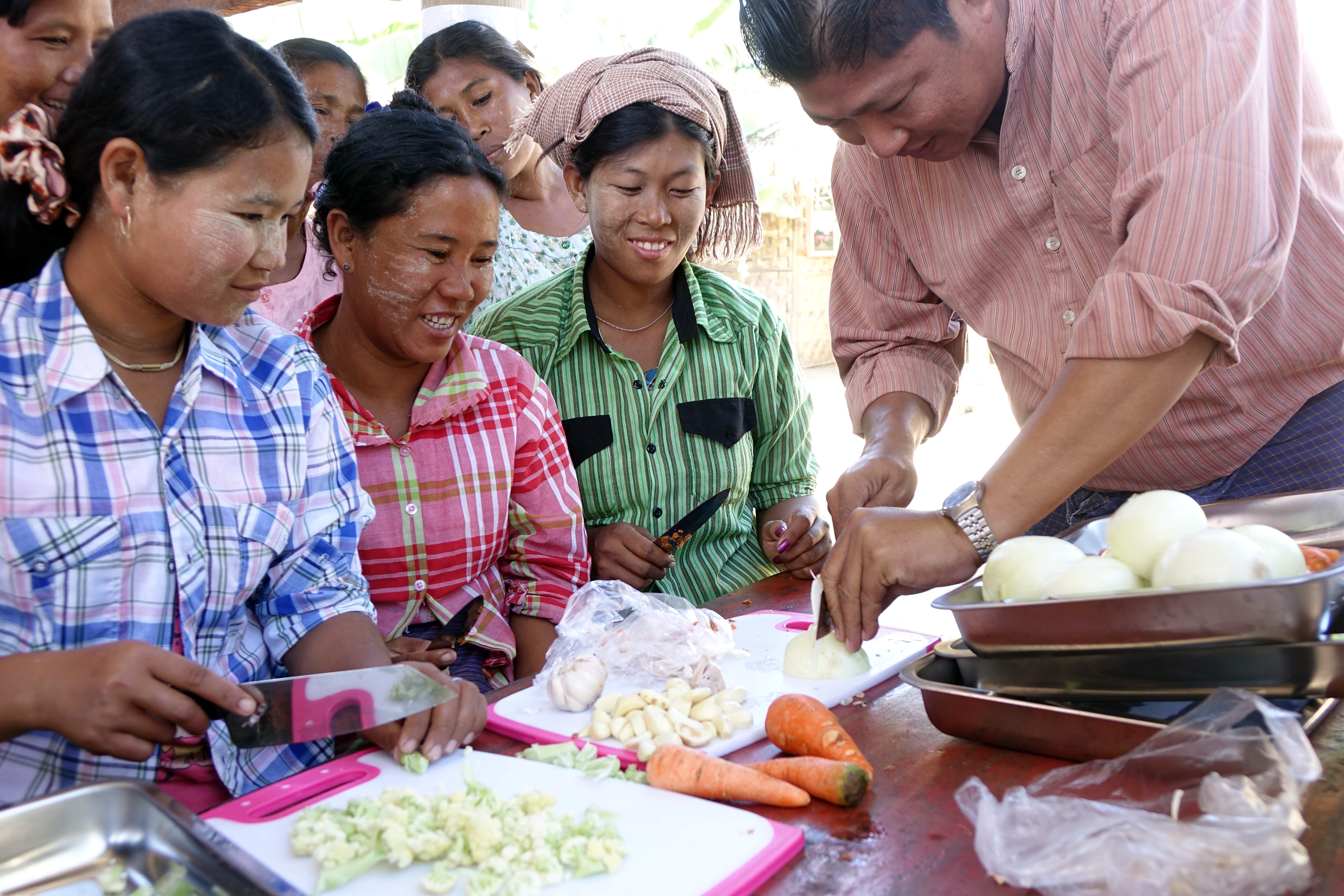 The project has also led to increased community pride – pride in the remarkable culture of the fishermen and women, who have for generations fished co-operatively with the Irrawaddy River dolphins. Tourists pay 10,000 Kyat (approximately $7.50) per person to learn from the fishermen how to cast a traditional fishing net. The training takes place both on land and on the river, and is very popular. Alternatively, they can go on a fishing tour and capture for themselves this timeless, photogenic activity.

With increased community and cultural pride, comes civic pride. For three years the project team has emphasised the importance of the environment and of waste management. Workshops in the villages involved almost 1,000 children. They included talks and visual displays as well as games, colouring competitions, and competitive litter collections! These workshops brought the school children, the school teachers and a broad range of parents into the project. Hosted at the school and in the monastery, they have enabled the greater community to learn about the project aims and understand its relevance.

Although some benefits are relatively easy to measure, others are more subjective. Civic pride is one of them but so too is a change in mind-set of some of the village youth. For better, for worse, the villages have become part of the global economy. Through the project’s website and through the marketing of tour agencies they are visible throughout the world. As with all aspects of globalisation, there are positives and negatives but one of the positives is the opportunity it provides for the young. The world has come to them. To some extent, they are now living in a global village, where on any particular day, the sound of French, German, English or Spanish might be heard. They are living in a village where local guides, men and women from the village, interact with an international, well-educated audience. The guides inform the visitors about the village school, the agriculture, the monasteries, and their way of life. In return, the visitors bring a sense of importance to the village. It is also inspiring for the villagers to know that their handicrafts will end up in Paris or Picardy, in London, Berlin or Madrid. It leads to a different perspective. 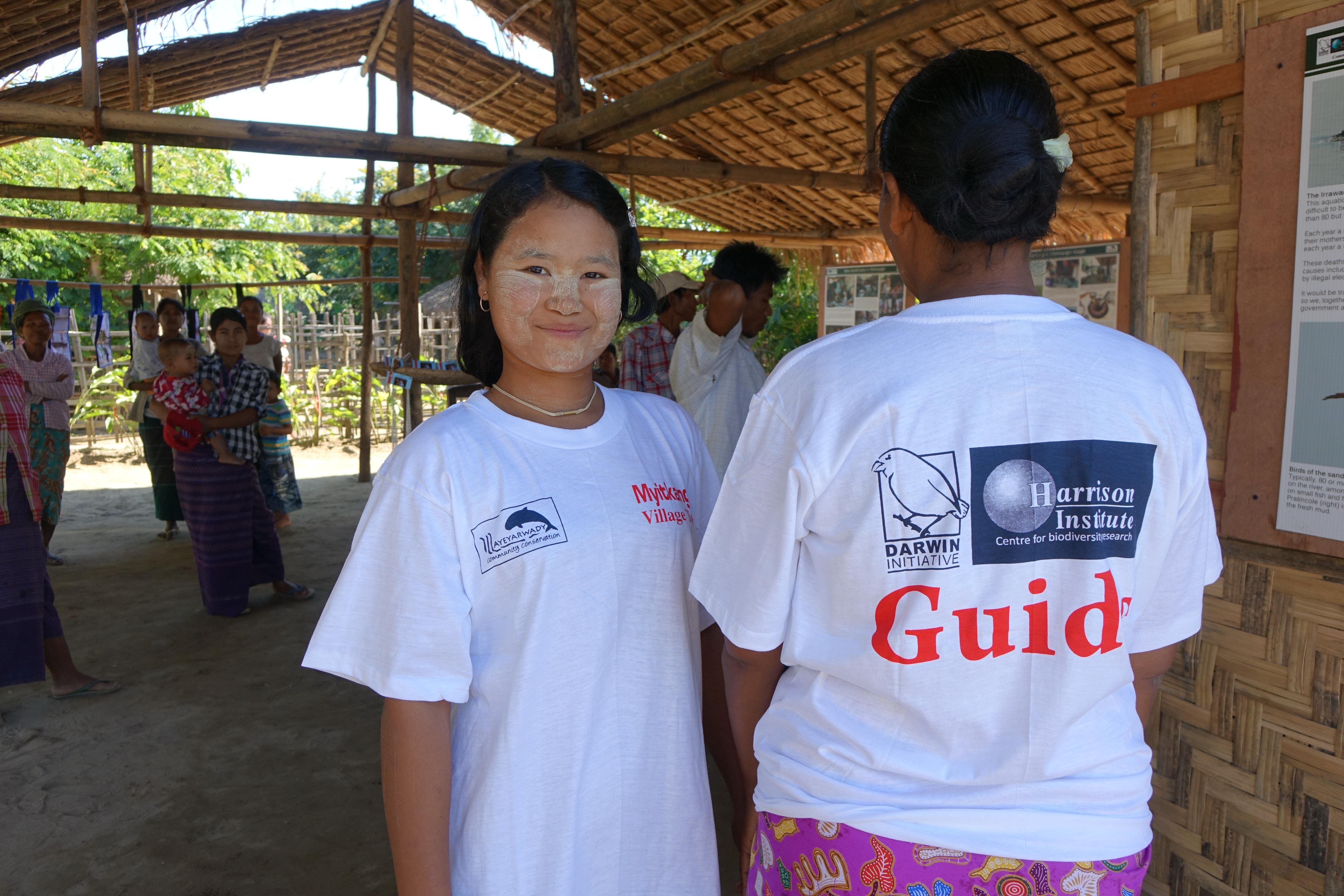 And what of the challenges? This project illustrated that in this instance poverty alleviation and biodiversity conservation are totally complementary. Like the fisherfolk, the visiting tourists love seeing the critically endangered dolphins, which are often sighted in the river opposite the destinations. However, being complementary does not mean that they are the same. Well managed and well directed poverty alleviation can lead to excellent long term benefits for nature.

Without doubt, the project raised awareness of the importance of the conservation of the dolphin, and associated wildlife, with the local communities of the Ayeyarwady, with the tourists, and most importantly with decision makers in the ministries in Nay Pyi Daw. It highlighted the threats to the dolphin and raised its profile (and value) as a charismatic species that draws international tourism to the river.

In the long term, having the support of the communities and decision makers is essential for meaningful dolphin conservation but so too is controlling upstream pollution and sedimentation, increasing the dwindling supply of fish and the eradication of illegal gill nets and electro-fishing.

So, is the dolphin in a better position today than it was three years ago? Yes. We have raised awareness, identified and reported on threats, trained 112 local tour guides and boat captains how to observe dolphins without disturbing them. We have trained 72 nature tourism guides and park rangers and most importantly we have shown to the decision maker and the local communities that the dolphins are not only of intrinsic and spiritual interest but also of economic benefit.

The real test of the project is not today’s or tomorrow’s results but its long term impact. In February, 2017, when we presented our results to the Minister of Hotels and Tourism, he was so enthusiastic that he immediately presented us with a donation of $5000 to begin Phase 2, overnight Bed and Breakfast accommodation at the two destinations. We believe that with such enthusiastic support from the government, from the communities, from private sector tour companies and from our own project team, there is a bright future for nature tourism on the Ayeyarwady and for the magical, charismatic Irrawaddy River dolphin.

To find out more about this project, visit its project page or its dedicated website!

2017 marks the 25th Anniversary of the Darwin Initiative! Since it was first announced in 1992 at the Rio Earth Summit, Darwin has gone from strength to strength. This year saw us passing the 1000th project mark, bringing the total number of funded projects to 1,055 – a fantastic legacy!

We are now inviting articles for our next newsletter celebrating the 25th Anniversary of Darwin. Are you involved in a Darwin project, or have you been in the past? If so – we’d love to hear from you! Click here for article ideas and guidance, and get in touch at Darwin-Newsletter@ltsi.co.uk.