Managing conflict for conservation and wellbeing

We will soon be releasing our next Darwin Newsletter, themed around Conservation and Conflict (for details keep an eye on our website and twitter, or see past editions of our newsletter here).

In advance of this, we’re pleased to feature a guest blog from the Zoological Society of London’s (ZSL) Santiago Ormeno, Project Manager for their Lake Ossa Project in Cameroon:

The Lake Ossa Wildlife Reserve is a refuge for endangered fauna, among them West African manatees, freshwater turtles and crocodile populations. It is also home to an array of fish species on which surrounding fishing communities rely for their subsistence. However, overfishing, poaching and the destruction of lake habitats pose a severe threat to wildlife, and harm the livelihoods of local communities. With the support of the Darwin Initiative, ZSL works with local communities, the Ministry of Forestry (MINFOF) and local NGOs to implement a clear co-management framework for this unique freshwater ecosystem. However, bringing people together in an ecosystem-based management approach often involves managing conflicts among communities. There is also a need to address the challenge of human-wildlife conflict; manatees and freshwater turtles found in the reserve often damage fishing nets.

ZSL is working to resolve conflict in a number of ways:

Often, conflicts between resource-users and law enforcement agencies are due to lack of awareness of national law, or bias on how these are enforced. We are supporting communities and the Conservation Service to develop a local code of fishing. This code clarifies regulations and access to fishery resources and was developed following extensive and participatory community consultation. It was also ensured that management measures were aligned with national regulations.  The code of fishing was established in December 2015, and was revised one year later to give communities the opportunity to amend it and reflect on its implementation. Since its application, it has proven an effective tool to prevent conflicts among fishers using different fishing gear and to develop a better framework for the conservation of biodiversity. It does this by restricting certain fishing techniques and establishing no-take zones in areas where there are lots of manatees. 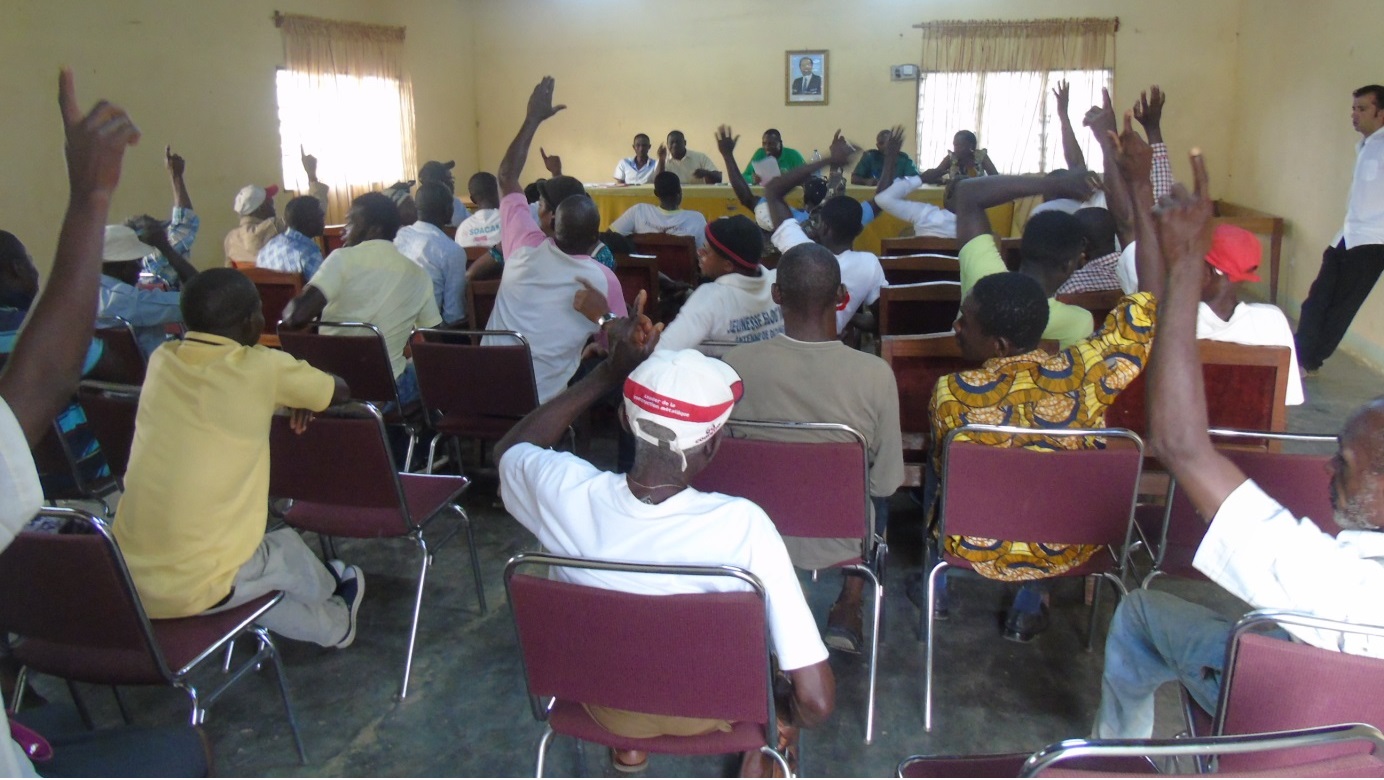 Validation of the code of fishing, Credit: ZSL

Conflicts among community members are another challenge tackled by the project. Disagreements frequently arise due to jealousy, a lack of dialogue between fisher leaders and fishers, elite capture (unequal access to resources across the community), or theft of fish-catch and gear. Often, the leadership and legitimacy of fisher management committees are undermined due to bad financial management, personality issues or a lack of understanding of the roles and responsibilities of committee members.

Through our project we have encouraged the creation of VSLAs in the zonal co-management committees and farmer groups in order to provide communities with a clear methodology to manage their finances. VSLAs are self-sustaining savings groups that have successfully been used by ZSL in marine and freshwater ecosystems in Cameroon and the Philippines, with the support of the Darwin Initiative. VSLAs operate with internal rules established by the members themselves, providing community members an opportunity to hold regular meetings. These meetings facilitate communication between fishers and the administration. In order to ensure that committees adequately represent fishers, community delegates and traditional chiefs are invited to participate in fisheries management debates. Also, fishers and farmers are given the opportunity to participate in income generating activities through VSLAs. As a result, conflict between these groups is reduced.

Directly addressing the cause of human wildlife conflicts

Do you work on a project that deals with conflict? How do you mitigate and manage against this? To find out more about this project, “Community-based conservation for livelihood development in Lake Ossa Manatee Reserve”, visit its page on our website here.